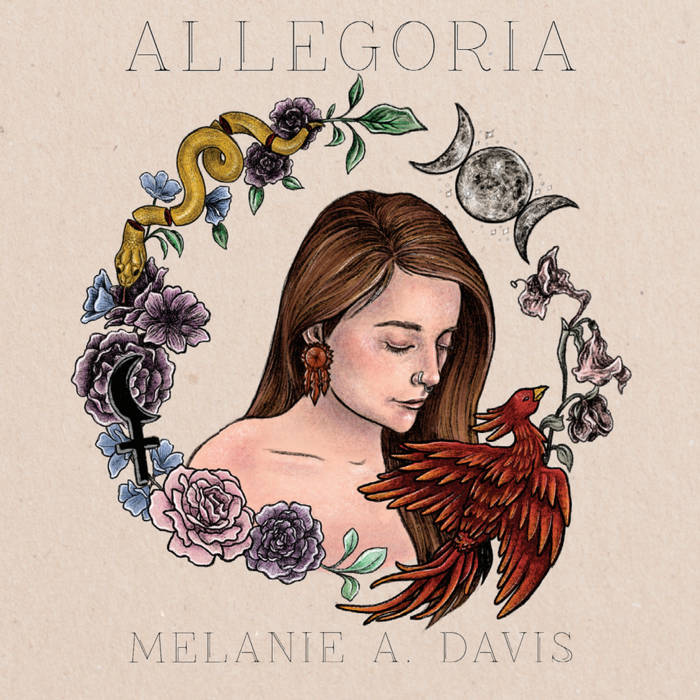 Unapologetic, brilliant, and beautiful, Allegoria (2020) is the latest release and first studio album of Kentucky singer-songwriter Melanie A. Davis. Recorded in Nashville, TN at Welcome To 1979 and in Paducah, KY at Loud & Clear Studios, the production quality of this album is excellent.

The songs blend moving social commentary and incisive self-reflection in the best folk tradition with captivating delivery and ethereal accompaniment. The guitar is elegant and unobtrusive from clever finger-style rhythms to washed out dreamy shimmer, and most tracks are adorned with simple but effective percussion. Moods build and flow effortlessly across wide ranges of emotion, and her jazz-influenced style is original and unmistakable.

Allegoria is complex but relatable, airy yet down to earth, and intelligent while managing to convey incredible emotion. In it, Melanie A. Davis has delivered us a more timely than ever call to address and question our very modes of being both within and without. A better album for right now is hard to imagine.

Highlights: Gallowman, Sisters, I Don’t Really Care, Do You?

Vorrh is a dark-ambient band based in Baltimore, MD. Their debut album, Nomads of the Infinite Wild, was released in March 2018. Vorrh’s music gives off an earthy vibe and air of mystery. The songs uncoil into a vibrant soundscape–part forest, part desert–each one seamlessly flowing into the next. The guitar and vocal lines are matched in a steady dance, ghostly and shimmering. Its heaviness and fuzz are balanced by graceful, melodic subtlety. There is a lot of empty space here, used in the best way possible. Nomads of the Infinite Wild creates a mood and holds its listeners there. It’s calming drone is easy to be lost in.

Vorrh: Nomads of the Infinite Wild

The Neuro Farm is a four piece indie rock band based in Washington DC. Their second and latest release, Ghosts, is a seven song circuit through spacey darkness and attentive revelry. Their sound is layered beautifully with soaring violin and vocal harmonies and an intense, driving rhythm section. This is a group who understands that music is magic, and communicates it well. Simultaneously grounding and expanding, the feel of the record resonates deep within that place where we are “one purpose…one mind.”

For fans of: The Smashing Pumpkins, Chelsea Wolfe, Florence + The Machine

Ryan Gibson is an eloquent, somber exposition. The intricate guitar work beautifully laces melancholy melodies and cynical lyrics, with a rhythm section that subtly drives and underlines. Songs paint dark vignettes of bitterness and city streets, affected by a reverence for mystery and solitude. The lyrics sometimes contrast the pretty melodies that contain them with their unabashed spite, boldly calling out the state of a world that is cruel and often shallow. But even here there are glimmers of hope and innocence. It is the work of an artist with the depth and resiliency to “transcend hell,” and still have the playfulness to sail the sewer in a paper boat.

The beauty of this album is in its subtlety. Harmonies that bring great depth are sometimes barely audible, where simplicity of sound is an illusory device. Each songs is meticulously crafted; each part is envisioned, played, and layered with the precision made possible by being the work’s sole creative source. This is an album one could listen many times and still continue to uncover nuances.

To The Moon is a three piece instrumental band from Baltimore, MD. Travel Music of 2017 will be their second release, and first with the current lineup. The album opens with space and mystery, building to a forward sound driven by the drums and bass. The minimalist sound lends to an atmosphere for clarity; each player is heard unmistakably, and contributes something invaluable to the sound. The songs are curious and experimental, adventurous and bold.

There is something on the edge of heaviness in songs like “Blood Orange,” and in the title track. These march at a steady, driving pace, determined to get some mission accomplished- possibly incognito. Some tracks could be in scenes of a modern day spy or action movie where the characters are definitely wearing sunglasses. Travel Music is goofy at times and very straightforward. But the guitar effects and edgy bass lines contain subtle dark undertones throughout, hinting at something thrilling and dangerous that is just beneath the surface. “Aliceanna” layers that with guitar and bass harmonies, and a screaming guitar solo that is so right.

To The Moon: Travel Music

Lilac Daze is a pop-punk/post-grunge indie garage rock band from Frederick, MD. They have released three records since 2013, toured all over the east coast, and still, arguably, have not received the credit they deserve in their own hometown. Sedated, their latest six song EP has been played through my speakers more times than I can remember since its release in July 2014. That was around the time I had just begun to venture into the Frederick scene, moving just a short distance away from everything familiar near DC, knowing nothing about what I was in for.

The city of Frederick, friendly and welcoming at first, had gradually revealed itself to be the center of its own universe; one that is split down the middle into folk and heavy metal music, with room for little more than a few Weezeresque polished garage rock bands in between. I have been lucky enough to hear a hand full of great rock bands here with real originality and creativity, but they are hard to find. I would bet that there are lots more, practicing in basements and bedrooms just waiting for the right opportunity to be heard. Within the folk and metal genres there are ones worth hearing, but they will almost certainly have that opportunity since the scene caters to that. (End rant).

I had heard Matt’s other project, Cosmic Halitosis, play live on occasion, and even once shared a bill. Though I will admit I was put off by the name, I was instantly a fan of his catchy songwriting and lively, playful style. So I was not surprised to fall deeply in like with Lilac Daze. Sedated starts out strong with Frederick Rock City, the heartfelt, melodic song that sticks in my head sometimes for weeks at a time with the lines:

“I used to think all humans were inherently good
every time i’m wrong someone proves me right
what’s the riddle to this?
I think i’m too serious”

I will have to call this one my favorite, though the rest of the album certainly backs up the good first impression. These songs are all heavy and melodic, and abrasive in all the right ways. They have a fun and bouncy energy that makes for a great live show. There is something childlike about the lyrics– philosophical, disillusioned but innocent, and strikingly honest. This music has heart and passion. It’s the kind of music that gets real enough to physically lift you out of a bad situation through its words and conveyed emotions. The guitar and bass parts are straightforward and stark, and the tone is satisfyingly crunchy. The drums are solid, and seem to lead the whole operation. The band’s aesthetic is consistent and charming. They have all the makings of a band that will go far, and I hope they do.

Breaks is an album that has the sound of a timeless classic. Its heavy, rhythmically driven sound pays tribute to earlier doom metal and blues rock bands like Black Sabbath and Pentagram, but still comes across as authentic and original. The occasional spacey, atmospheric guitar sounds balance the cutting guitar and bass unison riffs, and the drums and bass are played together with the kind of precision that comes from years of musical dialogue. It is a well rounded sound, abrasive in all the right ways.

Listening to Breaks paints pictures of an epic adventure, fighting fire breathing dragons and carrying swords across dark mountains. The vocals are mixed back, sounding like cries through a dungeon wall. The three main characters take turns in the lead, each one vital to the sound. I have to say as a bit of a minimalist, I appreciate that there is nothing extra here. Every note and every beat is necessary, even with a bit of effected guitar. It is a bold statement in the face of the DC scene, which can become so cerebral and saturated with sounds of indie and dream pop that it loses a bit of the visceral, primal energy that is essential to good rock music. Caustic Casanova brings that energy in droves with the slow-heavy  Breaks, and they do it right.

You can listen and download the album via Retro Futurist here:  https://retrofuturist.bandcamp.com/album/caustic-casanova-breaks.

Catch their next show at Guido’s in Frederick, MD on November 28th, and look for more upcoming show dates here:  https://causticcasanova.bandcamp.com/album/breaks